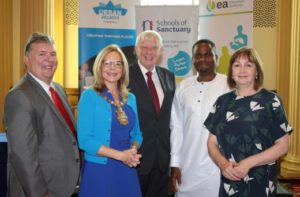 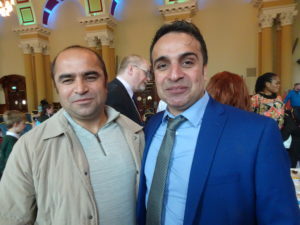 On 20th September at Belfast City Hall, in the presence of the Lord Mayor of Belfast, Tina Black, another 10 schools were awarded Schools of Sanctuary status thus demonstrating that these schools are welcoming places for pupils and their families, where every child feels safe, where they are fully accepted and included in the activities and life of the school. The aim is that these schools will become beacons in the community as places where cultural diversity is valued and celebrated. As some of the Schools are in Derry/Londonderry, we were joined on Zoom by the Sandra Duffy. Mayor of Derry City and Strabane District Council.
The Schools of Sanctuary programme is an award scheme being piloted in the Urban Villages areas of Belfast and Derry/Londonderry with support from the Northern Ireland Executive’s Urban Villages Initiative, the Belfast City of Sanctuary group, and the Intercultural Education Service of the Education Authority.
It was the first time that many of the children had been in Belfast City Hall. Between a drumming circle and flamenco dancing there was plenty of noise and movement!
A happy day with lovely food thrown in! We now have a total of 60 schools in Belfast and Derry/Londonderry! We have to find ways to expand the programme beyond these two centres of population.
If your school is interested in working towards a School of Sanctuary award, please contact the Intercultural Education Service’s Helpdesk by email at [email protected] or telephone 028 9448 2210.
Schools awarded this year were
Model Primary School, Derry
St Eithne’s Primary School, Derry
Dundela Infants School, Belfast
Our Lady Queen of Peace Primary School. Belfast
Dundonald Primary School, Belfast
Nettlefield Primary School, Belfast
Bunscoil Mhic Reachtain, Belfast
Holy Rosary Primary School, Belfast
St Clare’s Primary School, Belfast
Springfield Primary School, Belfast
This means that there are now 61 Schools of Sanctuary, mostly in Belfast with the rest in Derry/Londonderry. That’s quite and achievement!
Many thanks to our partners, especially Dr Kieran Shields and Jane Camara of the Intercultural Service of the Education Authority and also The Executive Office of the Northern Ireland Government for enabling this through its Good Relations Programme.
We were also pleased to welcome our friend Homayoon John Shirzad and colleagues from Places of Sanctuary, Ireland so that we could share best practice throughout the island of Ireland to ensure that all our schools are welcoming, safe and inclusive. 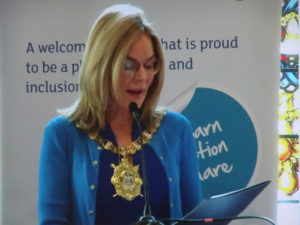 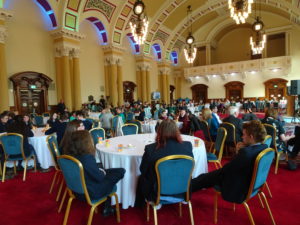 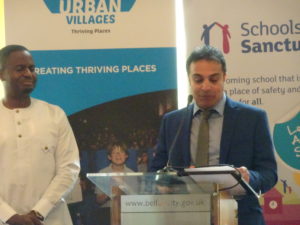 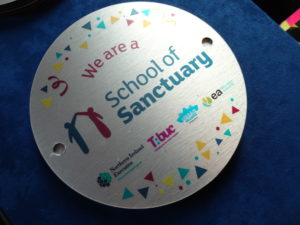